Signing Sancho was like winning the lottery! - Matthaus full of praise for English star 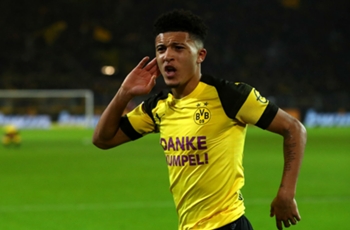 German legend Lothar Matthaus says that Borussia Dortmund's signing of Jadon Sancho was a major coup for both the club and the league, comparing Sacho's arrival to "winning the lottery". Sancho has proven a revelation since breaking through with Dortmund's first team, providing seven goals and nine assists in 21 Bundesliga appearances this season for the league-leaders. The 18-year-old winger's success earned him three caps in 2018, just one year after leaving Manchester City due to a lack of playing time. It took just a reported £8 million ($10m) fee to secure Sancho's move to Germany, and Matthaus says that money looks like the bargain of the century. "I saw him for the first time two years ago - at the European U-17 Championship," Matthaus told Ruhr Nachrichten. "England played against Norway and I was in the gym on the treadmill, in front of me on the screen was the game. Normally I do not let anything change my focus, but there I stopped after 15 minutes because I followed the game and I noticed a player: the left side winger for England. "Dribbling, double passes. Very strong! I called my manager to tell me who that is and where it came from. Five minutes later the SMS returned: Sancho, Manchester City. "I called him and told him that if he signed him, he could make a lot of money. I had only seen him play for ten minutes. And to get that for little money from in England is like winning the lottery. "He not only helps Dortmund, he also helps the Bundesliga beyond the borders. In England, the Bundesliga is gaining in importance, and now he is an international player." Sancho will return to England on Wednesday as Dortmund face off with Tottenham to open the Champions League knockout stages. Matthaus says he expects Sancho to be extra motivated for the match at Wembley Stadium, a match that provides a chance to prove his previous doubters wrong while solidifying his spot as one of the game's brightest young talents. "The young players like Sancho are bursting with self-confidence. They are now pre