'Of course it's better if they drop points!' - Bernardo hopes for Man Utd favour against Liverpool 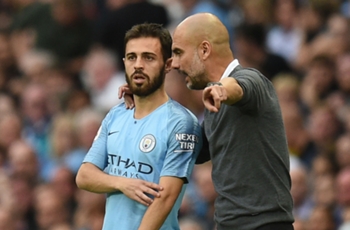 Bernardo Silva says Manchester City are obviously hoping for Liverpool to drop points against Manchester United, but the Portuguese insists he and his team-mates are more focused on their own performances. Manchester City are currently level on points with the Reds, who maintain a game in hand on last season's champions. The Citizens thrashed Chelsea 6-0 to temporarily move up the table, but don't return to league action until February 27 against West Ham. Liverpool, meanwhile, face Bayern Munich in the Champions League before their own return to Premier League play against Manchester United on February 24, a day where Silva hopes his club's crosstown rivals can offer a little help in the title chase. "Of course it is better if [Liverpool] lose some points," Silva said when asked if he could rely on a favour from Manchester United "But I think all of us, not only the manager but all of the players, have been saying to focus on our job. If we don't win our games, it doesn't matter what they do so that is the most important thing now." Manchester City seem to be back in top form following the 6-0 battering of the Blues, a match that showed the gulf in class between the two traditional powerhouses. Sergio Aguero starred with a hat-trick performance that was suplemented by a Raheem Sterling brace and a finish from Ilkay Gundogan. The result came in the aftermath of a sputtering effort against Newcastle, allowing the club to climb back into the title race with what Silva saw as an example of Manchester City at its best. "This one was one of the best [performances] probably because we played against one of the best sides in the world, we beat them 6-0," he said. "But I think, even this season against Liverpool at home, even though we just won 2-1, it was a fantastic performance." Now, the club will hope to use that as a springboard as the group prepares for a FA Cup clash with Newport County, a Champions League meeting with Schalke and a Carabao Cup final against Chelsea. “It helps you for the confidence a