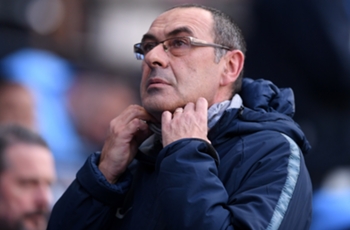 Maurizio Sarri has a month to avoid “a precarious position” at Chelsea, says Ron ‘Chopper’ Harris, with there a number of issues to address if the Italian is to avoid “walking”. The Italian was only handed the reins at Stamford Bridge in the summer of 2018 as he succeeded fellow countryman Antonio Conte. A bright start was made to life in west London, as he opened competitive action with a lengthy unbeaten run, but the wheels have come off in recent weeks. Inconsistency has blighted the Blues, particularly on the road, with their last two away displays in the Premier League delivering a 4-0 defeat at Bournemouth and a 6-0 mauling at Manchester City. Questions are now being asked of Sarri and his methods heading into a run of games which is set to see Chelsea take in a two-legged Europa League last-32 clash with Malmo, an FA Cup fifth-round tie with Manchester United, the Carabao Cup final against City and a league date with Tottenham. Asked what the future holds for Sarri, Blues legend Harris told Love Sport Radio: “That’s for the powers that be [but if I were in charge] I would most probably have a chat with him and say ‘you’ve got until the end of the month to put things right and if not, you’re obviously in a precarious position’. “The knives are out for the fella at the moment but it’s up to him now to get the players to rally round. “Whether he can do that remains to be seen because they’re playing Manchester United in the cup, the League Cup final coming up and four or five games in the next couple of weeks so I think he needs to put it right otherwise he will be walking.” Quizzed on where things have gone wrong for Chelsea, Harris added: “If you look at their last two away performances, they’ve conceded 10 goals. “In football, if you leak goals like we’re doing - we were doing it even before those games and I don’t think we look sound enough defensively - you don’t win matches. “One of the biggest losses that Chelsea have had is John Terry. John was a leader on the field and he organised things.