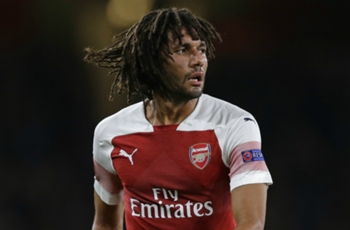 Arsenal midfielder Mohamed Elneny is excited with their 2-1 win over Huddersfield Town in Saturday’s Premier League game. On the back of a 3-1 defeat to Manchester City, the Gunners returned to winning ways at the John Smith's Stadium. Goals from Nigeria international Alex Iwobi and Alexandre Lacazette was enough to secure the maximum points for Unai Emery’s men despite Sead Kolasinac’s late own goal. The victory saw the Gunners move to the fifth spot in the log and tied on 50 points with Chelsea who suffered a heavy defeat against the league champions City on Sunday. The 26-year-old who featured for 31 minutes in the encounter – his fourth league appearance this season – has taken to the social media to show his excitement. “Three points, a happy weekend,” Elneny tweeted. 3 points ⚽ = A happy weekend