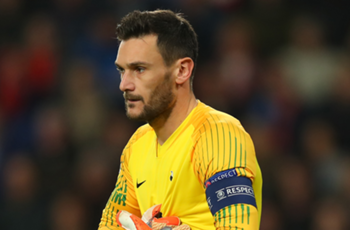 Ahead of Tottenham's huge Champions League tie against Borussia Dortmund, Hugo Lloris has urged the Wembley crowd to play their part. Spurs kick off the first leg of their last-16 tie against the Bundesliga giants on Tuesday, as they bid to continue their impressive recent form. Mauricio Pochettino's side have won their last three Premier League games to reignite their title hopes, with just five points separating them and leaders Manchester City. A 3-1 home win over Leicester City on Sunday ensured that Tottenham head into their clash with Dortmund full of confidence and Lloris will be hoping to build on his own match-winning performance. The World Cup winner produced a string of sensational saves to deny the Foxes and feels that the club's supporters could make a huge difference in their latest European outing. "We need the stadium to push, to help us - in some days it's difficult to deal with Wembley but hopefully, in this big game we'll receive this help from the crowd.” Lloris told the Telegraph. Tottenham have had to cope without key squad members Harry Kane, Dele Alli and Moussa Sissoko in recent weeks, grinding out wins despite being short on quality in the final third. Dortmund represent a step up in class opposition wise for the North Londoners and Lloris is wary of the threat they pose. "They [Dortmund] play fantastic football,” he added. “They have so many fantastic players and I'm not surprised they're top of the league in Germany. The manager is very good with a great idea of football. It's going to be very, very difficult. We need to obviously improve team performance. "In terms of performance, we have to do better if we want to dream of big achievements. But in terms of mentality, spirit you cannot ask more. "We won [against Leicester] but against a bigger side we couldn't have won that type of game. We won the game thanks to our spirit and character. For sure we'll improve. We need to deal with a few more games and then hopefully the squad will be full again until the end.” Lloris is