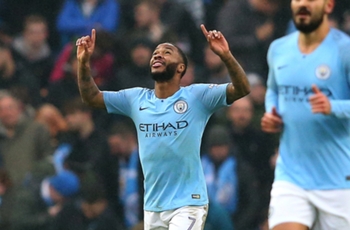 Raheem Sterling could become one of the greatest Premier League players of all time if he continues to perform for Manchester City, insists former England international Joe Cole. The 24-year-old is enjoying an excellent spell with the English champions, having netted 30 times since the beginning of last season. Sterling put in another impressive performance on Sunday in City's 6-0 thrashing of Chelsea at the Etihad Stadium when he scored twice as Pep Guardiola's team moved top of the league. And Cole has been mightily impressed by his displays on the wing, telling the Premier League's official website: "I think he's turned himself into a top, top player. "And a lot of credit has to go to Pep Guardiola and people like that. But the lad takes on lessons and you look at the positions he takes up and the amount of goals he scores now and, at the age he's at, there's still extra levels to go. "We could be talking in five years time of Raheem Sterling being one of the top Premier League players of all time if he keeps on winning trophies, keeps on scoring goals." City bought Sterling form Liverpool for £49 million ($63m) in the summer of 2015 and he has since scored 58 times in 158 appearances for the Manchester club, lifting the Premier League once and the League Cup twice in that time. But things were not straight forward for the England man, and he struggled to make an impact at City until the arrival of Guardiola in 2016. "The great thing about him is — because he's taken a move from Liverpool to Manchester — there's been a lot of weight on his shoulders," Cole continued. "He's taken that on and he looks almost mentally indestructible at the moment. "Just to get in that team is a feat in itself, but he's one of the top players in that team. And that is some going, and we should feel lucky and proud to have him as an English player and playing in our national team." Sterling could help City win the Premier League ahead of his former side Liverpool this season, with a dramatic three-horse race also involvi