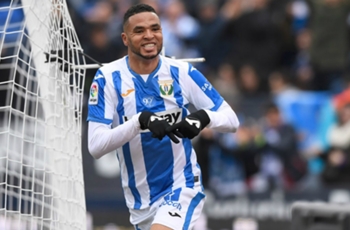 Leganes striker Youssef En-Nesyri has expressed his delight after setting a LaLiga hat-trick record in their 3-0 win over Real Betis on Sunday. The 21-year-old grabbed the curtain raiser 22 minutes into the encounter and added the second from close range nine minutes before half-time, before completing the treble in the 66th minute to become the first player from the Cucumber Growers to score a treble in the Spanish top-flight. Reflecting on the feat, the youngster has taken time to appreciate his teammates and fans for the accomplishment. "It wasn't a personal success, rather a collective team effort and scoring a hat-trick will always be one to remember," he said after the game. "I feel happy to be the first player to score a hat-trick but it took the collective efforts of those with me on the pitch, others on the bench and our fans inside the Butarque [Leganes stadium] to make it happen. "The match ball will definitely find a place at home but getting all three points is very important for us." En-Nesyri who joined Mauricio Pellegrino’s men from Malaga last summer has now taken his goal tally to eight in 20 league appearances. With the win, Leganes climbed to the 11th spot in the log with 29 points from 23 games. They travel to Estadio Municipal de Anoeta to tackle Real Sociedad in their next league game on Saturday.