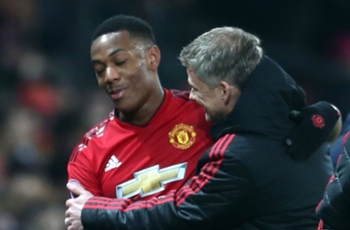 Anthony Martial wants Ole Gunnar Solskjaer to remain as Manchester United manager and is enjoying the caretaker boss' "different intentions" when compared to predecessor Jose Mourinho. Martial scored a superb solo goal in United's 3-0 win over Fulham on Saturday – a result that lifted them into the top four of the Premier League for the first time since the opening day of the season. Ten wins from 11 unbeaten games under Solskjaer have restored a feel-good factor at Old Trafford and that is something Martial hopes the 45-year-old is given the opportunity to continue beyond his short-term deal, which runs until the end of the 2018-19 campaign. "Well obviously things are going really well at the moment. We're really happy to have him here," the France forward told a news conference ahead of Tuesday's mouth-watering Champions League showdown against Paris Saint-Germain. "Sure, I hope we can continue with him. The final decision isn't down to us but certainly we're happy he's here at the moment." Martial was one of a number of United players to find himself in Mourinho's crosshairs as the former Chelsea and Real Madrid boss criticised him for not returning to last year's pre-season tour following the birth of his child and also fined the 23-year-old. An uneasy fit was also in evidence on the field, with Martial seemingly ill-suited to Mourinho's demands of wide attackers. As has been the case for many of his team-mates, an upturn under Solskjaer has duly followed. Solid match from the team today! Thanks to all of you for the amazing support! 3 Goals, 3 points @ManUtd #MUFC pic.twitter.com/V9fb1fbqvk — Anthony Martial (@AnthonyMartial) February 9, 2019 "We've got a coach who's got different intentions, a different approach," Martial said. "We're trying to do what he wants us to do. "When our new coach came in he had a lot of confidence and a lot of determination. That's really a boost to us. "He had a lot of confidence in us and we're trying to pay him back in kind. "He's asking me to attack more, th